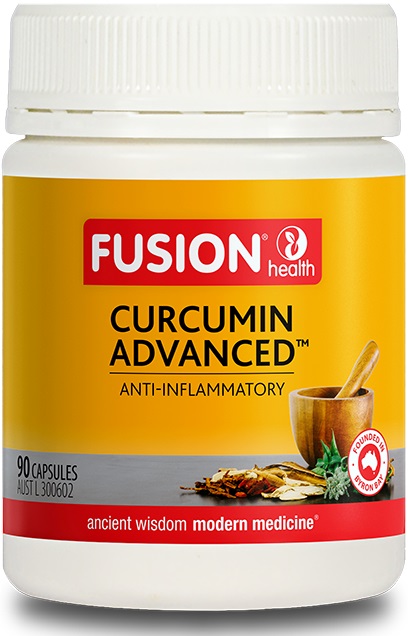 Inflammation of any sort causes oxidative stress and subsequent tissue damage, so having an anti-inflammatory and antioxidant supplement together not only assists with the symptoms of inflammation such as pain, redness and stiffness but also neutralises the free radials produced due to the inflammatory process. If the oxidative stress is not neutralised it can cause cellur damage and further destruction of the inflamed tissue.

In normal circumstances curcmin would not be well absorbed by the body so obtaining it straight from its dietary source is not often effective for treating inflammation. Due to the addition of Piperine or Black pepper to Fusion Curcumin Advanced the formula becomes highly bio-avaIiable, at least 20 times stronger than curcumin alone, and exerts a potent anti-inflammatory effect.

As an broad-spectrum anti-inflammatory Fusion Curcumin can be used to assist the managment of many inflammatory condtions both actue and chronic. Some of these condtions include: osteoarthritis, rheumatoid arthritis, IBS (Irritable Bowel Syndrome), sport injuries such as ankle sprains, and period pain just to name a few.

How to Use Fusion Curcumin

Take 1 capsule of Fusion Health Curcumin Advanced twice daily with food. An extra dose may be taken to enhance results or as professionally prescribed.