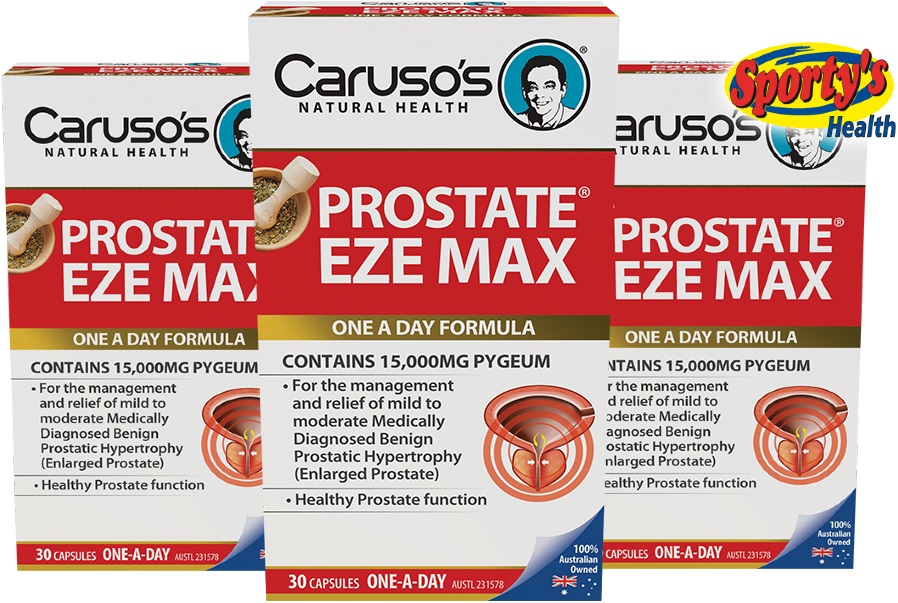 The first powerful ingredient in ProstateEZE MAX is the clinically trialed herb Pygeum. Research indicates that taking 15,000mg of Pygeum daily may provide symptomatic relief of medically diagnosed BPH (Enlarged Prostate). In traditional herbal medicine Pygeum has been used to aid the symptomatic relief of an inflamed prostate gland and to assist the symptoms of urinary problems such as incomplete emptying of your bladder, after-dribbling, weak urinary flow and a hesitant, interrupted flow just to name a few. As a bonus, Pygeum is traditionally used as an aphrodisiac, which is great news if your sex life is suffering.


Caruso's ProstateEZE MAX May be Helpful for:

• Men who urinate frequently or need to urinate urgently even though there is little urine to pass
• Men who frequently urinate at night
• Men who have difficulty commencing and finishing urination
• Men whose urine stream is weak or stops and starts
• Men who experience pain or a burning sensation when urinating
• Men who feel they have not completely emptied their bladder or who experience dribbling after emptying
• Those with a family history of enlarged prostate
• Those displaying early indicators of an enlarged prostate i.e. getting up during the night to urinate

ProstateEZE MAX has been clinically trialled and proven to have a significant positive effect on the management of symptoms of medically diagnosed Benign Prostatic Hypertrophy over a 3 month period, in particular day and night-time urinary frequency. BPH is present in more than 50% of men aged over 60 years with 15% to 30% of these men reporting lower urinary tract symptoms.

• It has been traditionally used for urinary problems, difficult urination and prostate gland inflammation.
• Evidence has shown the effectiveness of Pygeum extract in reducing the clinical symptoms of medically diagnosed Benign Prostatic Hypertrophy (BPH).
• Clinical symptoms that improved by using Pygeum include: night urinating, difficulty starting micturition, incomplete emptying, daytime frequency, weak stream, after-dribbling, hesitation and interruption of flow.
• Pygeum inhibits the enzyme 5 alpha reductase, an enzyme which converts healthy testosterone into an unhealthy testosterone (DHT). By inhibiting this conversion, it reduces the level of DHT impacting prostate cells.
• Sitosterol, the active constituent in pygeum, interferes with the formation of prostaglandins in the prostate that cause inflammation and swelling.
• Tissue biopsies have also shown that treatment with lipophilic extracts of the bark help to increase quality, quantity and enhancement of prostate gland secretions including seminal fluid.
• Overall Pygeum balances and supports normal male physiology and function.

Saw Palmetto (Serenoa repens)
• Traditionally used by American Indians in the treatment of disturbances in the genitourinary tract, as a sexual tonic and aphrodisiac.
• Primary clinical application is in improving the clinical symptoms of BPH, particularly nocturia, daytime frequency, incomplete emptying, peak flow rate, decrease residual volume and prostate congestion.
• Saw Palmetto may reduce the levels of dihydrotestosterone (DHT) by inhibiting the conversion of testosterone to DHT. The conversion of testosterone to DHT causes the enlargement of cells in the prostate.
• In a comparative study using finasteride, Saw Palmetto produced similar results in the improvement of urinary symptom scores and peak urine flow.

How to Use Caruso's Natural Health Prostate Eze Max

Take 1 capsule daily with main meal, or as professionally prescribed by your healthcare professional.