BSc Creatine is a pure micronized pharmaceutical grade powder designed to support explosive strength and power and assist in the building of lean muscle mass. Body Science Pure Creatine is a relatively tasteless powder that may be added to pre-workouts, intra-workouts, post-workout protein shakes or simply mixed in water and consumed. Evidence suggests that more creatine is "taken-up" by muscle when it is consumed with a high-glycemic index carbohydrate, such as dextrose (glucose).

Body Science BSc Micronised Creatine Monohydrate is 100% pharmaceutical grade, HPLC tested creatine allowing fast absorption and rapid utilisation due to the smaller particle size. Creatine serves as an energy reserve for muscle cells due to its ability to rebuild the phosphocreatine molecule, which donates a phosphate group in order to rebuild the ADP back up to ATP. This is the only anaerobic energy synthetic process available in the human body. ATP releases a short burst of energy to muscle cells, which we need for explosive strength and power. 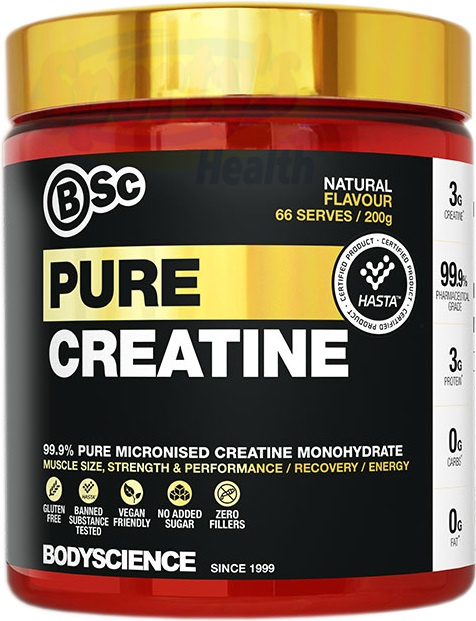 It was reported in Sports Medicine in 2017 that Creatine is particularly helpful for exercises lasting up to three minutes1. Because creatine supports this phosphocreatine pathway and anaerobic muscle contraction, it may be that we can lift a little more, creating a little more muscle damage (micro-tears), which will then lead to a greater stimulus for muscle growth.

BSc Creatine Monohydrate also causes water retention in the muscle cell (cell volumisation), which is believed to be a sign of anabolism. Body Science Pure Creatine may benefit those wishing to increase their strength and lean muscle mass. In a recent study Creatine was shown to enhance lean tissue mass, leg strength and endurance during a 12-week resistance training study in men averaging 70 years of age. Given that the ageing process is associated with a loss in muscle mass and strength, Creatine combined with a strength training program appear to be a promising combination for ageing individuals as well as athletes above the age of sixteen.

Creatine is synthesized in the human body, primarily by the liver and kidneys, at a quantity of abour 1 gram per day2. Additionally, meat and fish contain creatine, fish perhaps being the superior source of this nutrient. Standard omnivorous diets are believed to contain about 1 gram per day. For this reason, creatine supplementation may be even more beneficial for vegans and vegetarians, though pescatarians may be fine with regular fish consumption. As with any amino acid, dipeptide, tripeptide or polypeptide, muscle cell uptake from the blood can be heightened by the presence of insulin. Insulin is actually a powerful anabolic hormone synthesized in the pancreas, and primes the cell for amino acid uptake.

Therefore, taking creatine with a small amount of high glycemic index carbohydrate or sugar will increase muscle cell uptake. Body Science Pure Creatine may be taken before, during or after exercise.

How to Use Body Science Pure Creatine

Take 3g before, during or after exercise