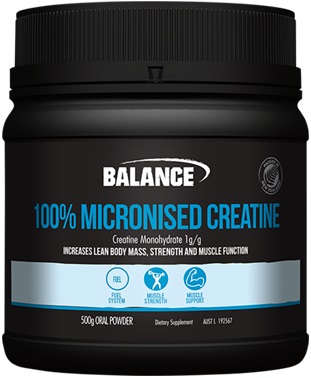 Balance Creatine is a pure micronised product that supports explosive strength and power, aids recovery between sets and enhances lean muscle gain. Having been used for decades safely within the sports nutrition industry, creatine may be taken daily to replenish muscle levels of free creatine and phosphocreatine to enhance performance.

Creatine Monohydrate is an ergogenic aid that has been available on the sports nutriton market for decades now. This product has helped countless athletes and recreational trainers stride towards their goals. The word "monohydrate" is a food technology term that is now heavily associated with creatine. "Monohydrate" simply means one molecule of water, which is relatively meaningless given that creatine is mixed in fluid before ingestion. Even those creatine tablets or capsules are typically swallowed with swallow them with water, and if not they will acquire moisture in the stomach anyway! So we can generally just regard creatine monohydrate as pure creatine, which is the case with Balance Creatine. 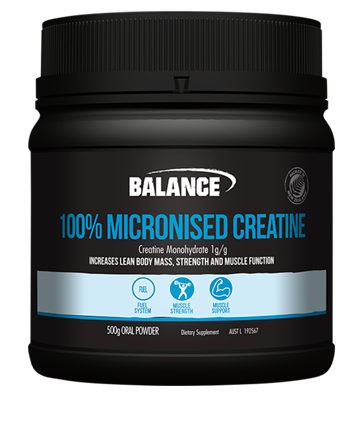 Creatine supplementation has gained a lot of traction over the years, primarily due to the fact that the body's main strategy for increasing energy (ATP) under oxygen insufficient conditions (anaerobic) is via the phosphocreatine molecule. Phosphocreatine is able to rebuild ADP back up to ATP, which means more explosive energy.

The releasing of a phosphate-oxygen group from ATP generates the energy needed for life, inclusive of which is muscular contraction! So to have plenty of phosphocreatine on hand, in order to rebuild "spent" ADP back up to ATP is not a bad idea. Though the theory sounds solid, there are a number of well designed clinical trials indicating that creatine is a useful ergogenic aid, making Balance Creatine a useful training assistant.

Creatine has been shown to be useful for a broad range of exercises, with a number of different athletes1. However, it is believed that exercises lasting up to 3 minutes will result in the most benefit, as this is where an anaerobic boost in performance will make a significant clinical impact2. It will be particularly helpful for individuals performing explosive exercises, such as sprinters and powerlifters. So, if you're ready to take strength and power to the next level, give Balance Creatine a go.

Creatine is best taken before workouts to aid performance and post-workout to assist recovery.