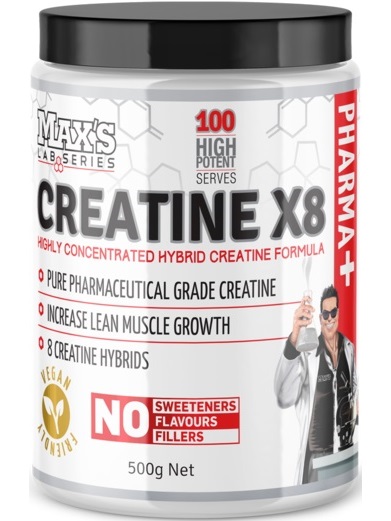 Max's Lab Series Creatine X8 delivers quality creatine with both sustained and fast release activity to support anabolism, strength and power. Creatine X8 may be used to support the building of lean muscle mass and to offer natural performance enhancement for explosive and high intensity exercise.

Maxs Lab Series Creatine X8 (formerly named Cre8 Carange) is a truly unique creatine formula as it uses a blend of 8 different pharmaceutical grade hybrid creatines - Creatine monohydrate,Tri Creatine Malate, Creatine Ethyl Ester, Creatine HCL, Creatine Anhydrous, Creatine Gluconate, Di Creatine Malate and Tri Creatine Orotate to allow for a sustained and steady release of creatine to fuel the body’s ATP system which is the most crucial energy system when it comes to strength and hypertrophy training allowing you to maintain your training intensity rep after rep set after set and get the most from each and every session. 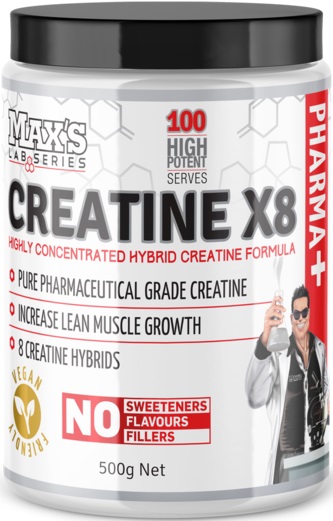 Maxs Lab Series Creatine X8's formula also contains Beta Alanine and Histidine with the combination of both increasing carnosine levels, to buffer of lactic acid allowing you to train longer and recover faster between sets.

The final ingredient in Max’s amazing hybrid formula is Arginine AlphaKetoglutarate or AAKG which is one of the strongest nitric oxide stimulators allowing faster oxygen and nutrient delivery to the muscles and giving you that muscle fullness or “pump” which also decreases the recovery period.

Taking Max's Creatine X8 with a drink conaining some sugars such as a sports drink or fruit juice can improve absorption and assimilation.

Maxs Lab Series Creatine X8 May be Used to: 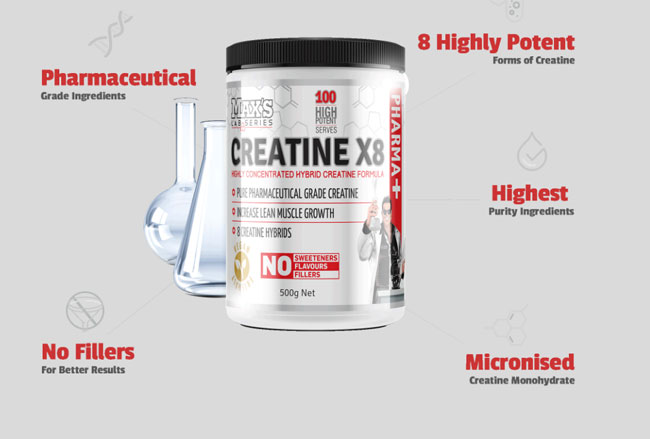 NO Sweeteners, Flavours or Fillers.